When we playing and playgrounds, we generally thinks of an outdoor activities with all the sun’s rays and sweat. However, Didi Murphy changes it with their modern concept of playing without going outside but still enjoys it. They have the indoor skate with a very fashionable design and it really looks safe and hip. Another product they have is the Jack Rocker that will not only serve as a bench but can also be an enjoyable seesaw and the same time which is definitely an space save. In addition, the bench’s base can also used in storing some extra fun stuff you have to keep your place in order while having some fun playing. 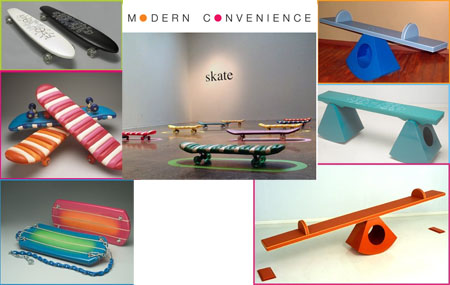 For school kids, Recess is a magical moment – the doors burst open, the playground in site with joyous possibilities, unlimited potential for imaginative games that build valuable social interaction. For adults though, Recess is mostly an idea of long ago now replaced with hectic scheduling, endless responsibilities: family, country, business, another load of laundry a cell phone or email to check. Thus the “See Saw,” the “Swing,” the “Jack Rocker Joggle Board” and the “Inside Skateboards/Longboards” are designed for interaction with the hopes that through this Recess or play activity, the collaboration, (you need two to See Saw!) brings about good ideas and well being between people.

Source : ModernConvenience via If It’s Hip