We have here a great eco-friendly submission from the Netherland based designer Lindey Cafsia called the Chair made of Tubes.The name is derived of the appearance the chair and how it is made, namely by combining cardboard tubes one to another. O + O = OO.

The tubes are re-used and they are originally from tubes for plotter-paper.The most of the designs I saw of cardboard products, were made from plates you can bend and deform to every single form u like. In this design I wanted to use to natural resistance to deformation of a circle, which is dependant of the thickness and diameter of the material, to create my own material / plate.To get this I combined tubes, which I knew would not bend or deform to each other. This looked a like a chain or a row. Later I connected the rows to each other. On this way I created, a pattern that would work like a plate of small elements. Preventing mutual rotation between rows and between the tubes was the biggest issue on this part.After completion of that part, I tried to come up with a design, in which no triangular form would be used to prevent deformation, but where the material should truly be working as a rigid material.The results are visible on the drawings and pictures that follow. 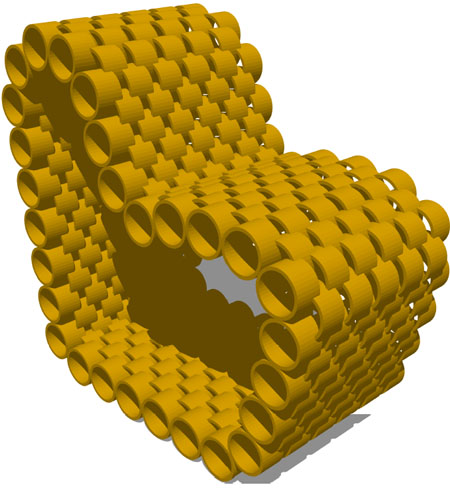 1 thought on “OO: Chair made of tubes By Lindey Cafsia”