Built to sustain the extreme climate of Northern Canada, the Team Ontario, BC had designed the North House, which is currently in 4th place for the Solar Decathlon 2009 in Washington DC. The house is a solar powered home that has high attention in insulation and glazing system that is in-charge of the houses’ passive heating and cooling. The house also has a building integrated photovoltaic tiles. With other competitors form places with mild climate, the team Ontario has a big chance of getting the attention. In addition, the house itself has cool features like the ceiling bed that can be fold up to save space. 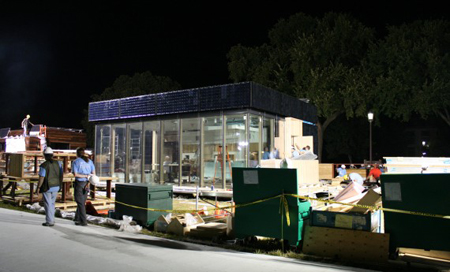 Source: The North Team via Inhabitat


Solar Impulse Night Flight: Flying without fuel, that's a crazy project
Building Made From Recycled Kitchen Sink
Let Your Kids Experience Green Lifestyle With Eco-Playhouse
MecoConcept’s LEGO Bricks Of Clay Will Help You Build Your Eco-structure
The Rake Showroom Is Another Green Architecture Design Made From Recycled Materials
The Eco-Headquarters By Caryn Grossman
Lifewall: A Modular Vertical Garden
The Coco Hut by Gert Eussen