The government of Ontario, Canada has made a move to promote the use of green vehicle. Starting 2010, the government will already issue a green license plate to green vehicles such as plug-in hybrids and electric vehicles. The plate was chosen via an online poll that garnered over fifteen thousand votes. The plate further uses the color green and shows Ontario’s official flower, the trillium and will be issued starting 2010. Vehicles with green license plate will have the privilege to drive in car pool lanes until 2015. They will also be using the priority parking spots on selected locations even if there is only one person in the car. 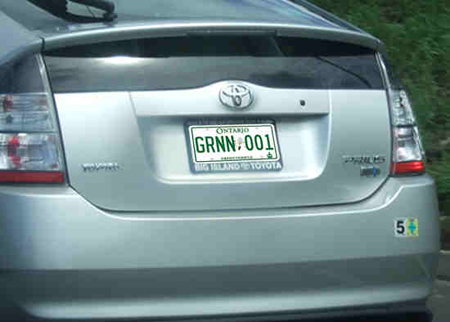 
Wearable Planter Will Let Your Enjoy Greeneries On The Go
Knuckles Made From Recycled Porcelain Ware
Is Wonderbag A Green Yet Hilarious Bag Design?
Ford Focus At-Home Charging Station: Green Fuel Right At Your Home
Fuel Cell Eco Friendly Golf Cart
Eco-Bath: A Bathroom Fixture Design That Will Recycle Water
A Bamboo Folding Clothes Drying Rack Will Let Your Hang Your Clothes In A Sustainable Fashion
Handmade Wool Soft Block: Keeping Your Babies Living The Eco-life At An Early Stage