A self-sufficient power center will be built soon in Gwanggyo, a new town in the south part of Seoul Korea, and the Dutch architects MVRDV won the project. The power center will house residential units, office, culture, retail, leisure, and education spaces. The center will have plantations around terraces with a floor-to-floor circulation system that stores water and irrigates the plants. In addition, the terraces are planted with box hedges with the ability to create a strong, recognizable, cohesive park that will in turn improves the climate and ventilation and at the same time will reduce energy and water usage. 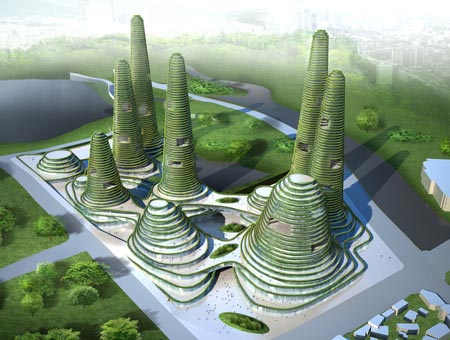 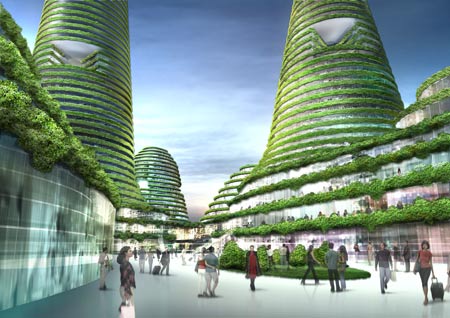 The Daewoo Consortium and the municipality of Gwanggyo announced the MVRDV concept design for a dense city centre winner of the developer’s competition for the future new town of Gwanggyo, located 35km south of the Korean capital Seoul. The plan consists of a series of overgrown hill shaped buildings with great programmatic diversity, aiming for high urban density and encouragement of further developments around this so-called ‘Power Centre’, one of the envisioned two centre’s of the future new town. 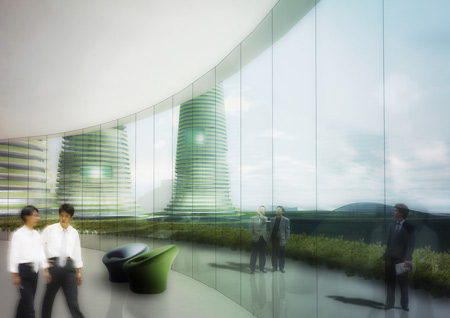 Since the beginning of the millennium local nodes with a high density concentration of mixed program are used in Korean town planning. These nodes consist of a mix of public, retail, culture, housing, offices and leisure generating life in new metropolitan areas and encouraging further developments around them: the Power Centre strategy. The Gwanggyo Power Centre will consist of 200,000m2 housing, 48,000m2 offices, 200,000m2 mix of culture, retail, leisure and education and 200,000m2 parking.

This diverse program has different needs for phasing, positioning and size. To facilitate this all elements are designed as rings. By pushing these rings outwards, every part of the program receives a terrace for outdoor life. Plantations around the terraces with a floor to floor circulation system store water and irrigate the plants. The roofs of these hills and the terraces are planted with box hedges creating a strong, recognizable, cohesive park. This vertical park will improve the climate and ventilation, reduce energy and water usage. As a result a series of overgrown green ‘hills’ appear in the landscape.

The site is surrounded by a beautiful lake and forested hills, the design aims to create a landscape on top of the new program that enlarges the green qualities and that links the surrounding parks by turning the site into a park. 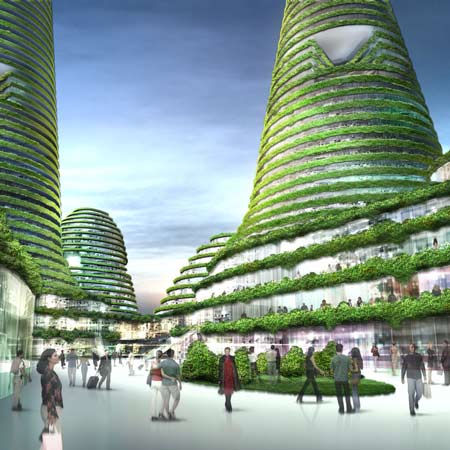 The shifting of the floors causes as a counter effect hollow cores that form large atriums. They serve as lobbies for the housing and offices, plazas for the shopping center and halls for the museum and leisure functions. In each tower a number of voids connect to the atrium providing for light and ventilation and creating semi-public spaces. On the lower floors the atriums are connected through a series of public spaces on various levels linking the towers and serving the outdoor facilities of the culture, retail and leisure program. The Power Centre creates a dense urban program with a green regard.

The concept plan is currently at the Gyeonggi provincial authority’s Urban Innovation Corporation for further development and feasibility study, the entire new town will be a self sufficient city of 77,000 inhabitants. The estimated budget and timeframe are still in the process of being established, completion is envisioned for 2011. A consortium lead by Daewoo develops the project with local firm DA Group, which commissioned MVRDV to design the scheme. British firm Arup is involved as engineer.
Source : MVRDV via dezeen